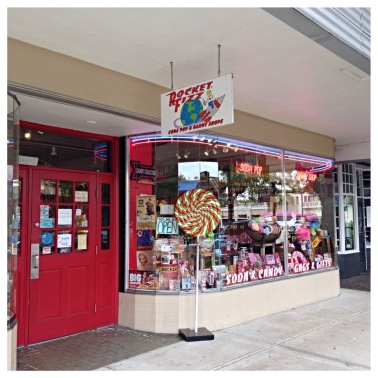 Soda Pop and Candy Shop. Sounds fun, right? Well, it is. I’m not a soda drinker, but if I see “candy shop”, I’m in. While visiting Orlando, FL, I passed by Rocket Fizz in Winter Park and had to stop in to check it out.

Living in NYC, I had no idea that this chain was so expansive, covering over a dozen states around the country. But, none in New York, which is why I was unfamiliar with the franchise. So, I got familiar. Walking in, all around the room you’ll find loads of different nostalgic candy, international candy, unique sodas in bottles and cans, and lots of quirky signs and novelty items. 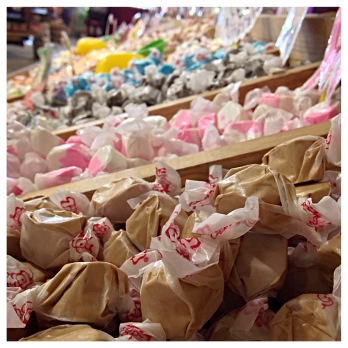 They have, what seems like, a mile long display of different salt water taffies, which I really love. Not all the time, but there’s something really great about a salt water taffy as a treat. Their variety is insane, and you can mix and match to your heart’s content. 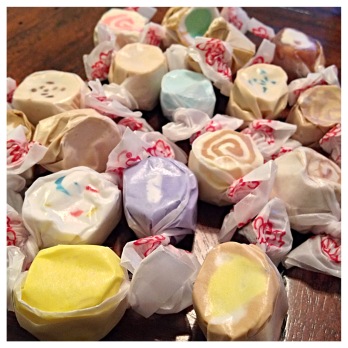 The Shorts:
Name: Rocket Fizz
Location: 520 South Park Avenue, Winter Park, FL
The Long and Short: Would I go back? Yes, they have so many different items, it’s fun to just even do a walk through to check out the variety of novel treats.
Would I recommend it? For sure. They have mainstream candies, as well as unique finds, with a little something for everyone. And, if you’re a soda fan, this is definitely for you.

On the quiet path of Greenwich Street, keep your eyes peeled for the unassuming door and entrance that lead to Telepan Local in TriBeCa, because you won’t want to miss it. This restaurant has a really lovely aesthetic, clean, a little woodsy with an emphasis on unique, liberally placed mirrors. Food wise, the restaurant’s focus is on American style, small plates, locally sourced and seasonal food.

The great thing about small plates, is that it allows you to try a bunch of things during one dining experience. The first thing I tried was the Asparagus and Ramps (lemon ricotta and sorrel). This was really nice, the vegetables almost take on a savory flavor, similar to that found in an Asian dish. To offset that a bit, the lemon ricotta is creamy, almost yogurt like, and has a bit of that zest from the lemon. 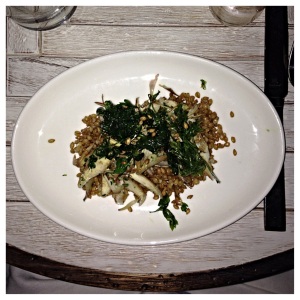 Next, I had the Shaved Artichokes (faro and fried parsley). I really liked this one. The artichoke had a nice citrus flavor, and the faro was tender. The fried parsley was great too, it added a nice, light crispness and airy crunch to the chew and meatiness of the faro. 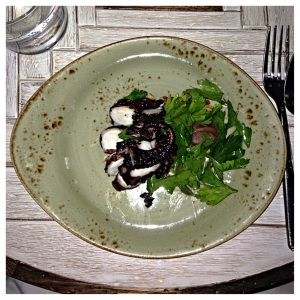 Then, I had the Grilled Octopus (red wine and almonds). I loved this one, the octopus was savory, tender and had this great char on the outside. The leaves here are lightly dressed, and have a nice vinegary bite from the pickled red onions. Then, you have the rich creaminess of the almond sauce with little bits of crunch from some added chopped almonds.

After that, we had the Sourdough Pizzette (fried calamari ‘marinara’ and romano). I really enjoyed this one too. The top of the dough almost has a creaminess to it, but then a great crunch around the edges and bottom. The calamari is a little on the bland side, but, the texture was a nice contrast with that of the creaminess and crunch of the pizza, and the sharp flavor of the cheese. 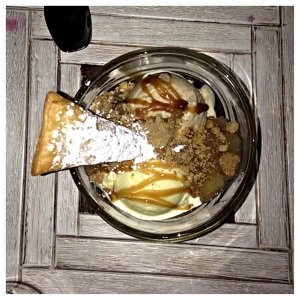 Of course, I had to get dessert too. I had the Apple Pie Sundae (deconstructed apple pie, cinnamon and vanilla ice cream, caramel sauce, apple pie filling). This was the perfect ending to this great meal. The ice cream is creamy and rich, I especially liked the cinnamon, and really adds to the apple pie filling and caramel, letting you feel like you’re having an apple pie a la mode. It’s also confected with these little crunchy bits, similar to a sugar crusted dough, that adds a nice little crunch to the dish.

The Shorts:
Name: Telepan Local
Location: 329 Greenwich Street
The Long and Short: Would I go back? Yes, there are lots of other delicious sounding plates that I’d really like to try.
Would I recommend it? Yes, the octopus and sundae were so great, I’d come back just for those.