The last stop on my 7 Best Doughnuts In NYC Challenge from Gothamist’s list is Dun-Well Doughnuts in East Williamsburg, Brooklyn. This friend duo brought the first all vegan doughnut shop to NYC. 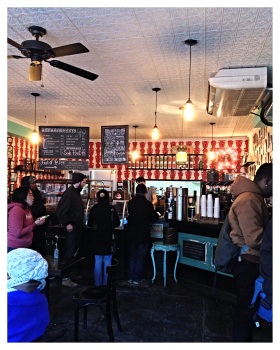 Inside, the shop is very inviting with plenty of cafe seating to relax, have a cup of coffee, a bowl of ice cream, and, of course, their doughnuts.

According to the list, I needed to try their Cinnamon Sugar doughnut. Some people tend to think that vegan desserts might lack what other egg and dairy desserts have. Here, they would be wrong. 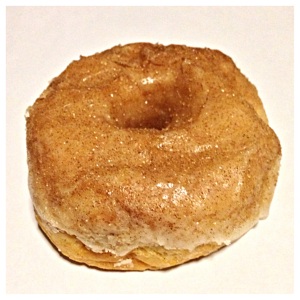 This was a cinnamony and sugary delight. The doughnut was light and pillowy in texture with a sweet glaze that melts in your mouth. Coating the glaze is the cinnamon and sugar, and the rich cinnamon flavor really pops.

The Shorts:
Name: Dun-Well Doughnuts
Location: 222 Montrose Ave, Brooklyn
The Long and Short: Would I go back? Yes, the flavors all sound great and unique and need to be tried!
Would I recommend it? For sure!

For the next location on my 7 Best Doughnuts In NYC Challenge off of Gothamist’s list, I went to Dough in Bed-Sty in Brooklyn. They’re hand making all of their doughnuts and glazes, and have glass windows at their kitchen so you can watch them craft everything right there.

These are some serious doughnuts, definitely larger than most, so, you won’t leave hungry. According to the list, Dulce De Leche is the one to try.

This doughnut was pretty unreal. The dough itself is light, doughy and hinted with vanilla. It’s coated with a perfectly sweetened glaze with a delicate caramel flavor and generously sprinkled with almond slices.

The Shorts:
Name: Dough
Location: 305 Franklin Ave, Brooklyn
The Long and Short: Would I go back? Yes, this was so delicious and the rest of their flavors sound incredible too.
Would I recommend it? Absolutely!