I’ve said it once, twice, three times a lady, or man, and I’ll say it again. I could eat Mexican food, just about every day. And, yes, Mexican food here in the states varies, where you’ll get authentic Mexican cuisine, to Tex-Mex, and, a chef’s interpretation of Mexican food. Which ever it is, I usually love it all. And, when you can also find Chinese influenced dishes on the menu as well? I’m intrigued, and in. So, I went to Mission Cantina in the Lower East Side.

Although the restaurant itself isn’t large, it packs in a lot of personality. Even though the lighting is dimmed, there are electric colored lights and bright decor to make the space more dynamic. Throw in a big screen playing movies (Clueless was the selection on my evening) and an “open kitchen” (closed in, but only by a glass window to watch the magic happen), and we’re having a party. Ok, so, we’ve got Clueless playing and a menu with Smashing Pumpkins on it, I was thrown right back to my childhood. And then I saw a group of 19 year olds sitting across from me and realized they probably have no idea what any of this is. Sad. Anyway, to drink away my sorrows of feeling old, I ordered the 49ER (tequila blanco, lemon, smoked habanero, honey). This drink was amazing. It had the perfect balance of sweetness and spice, making it somewhat of a spicy margarita, with a twist. 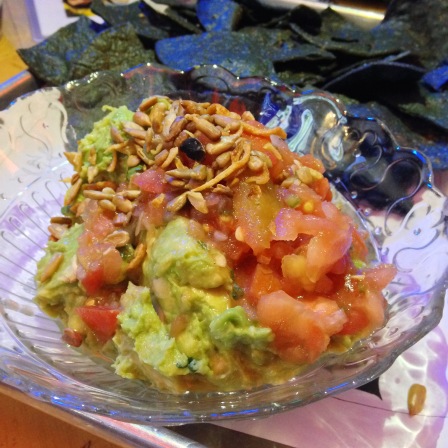 To start, I had their Sunflower Seed Guacamole. I really loved this, especially since I’m a real fan of foods with different texture components. You have the freshness of the diced tomato, creaminess of the avocado, and the crunch from the sunflower seeds. The chips were awesome too, blue corn, thick and crisp, with a nice sprinkling of spice on top. 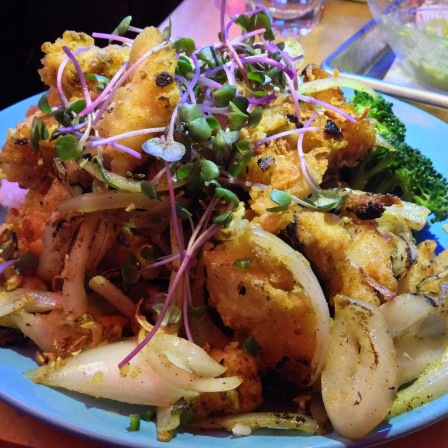 For my entree, I opted to go for the Chinese menu side, and went for the Salt and Pepper Fish Filet Over Rice. I was really pleased with my decision on this one. First off, the portions here are huge, which is pretty awesome, since I’d say it’s near to impossible that you’ll leave feeling hungry. In fact, you could probably pack up half of it for another meal. On top of a large bed of sticky white rice, is a generous portion of fish, lightly battered and fried, liberally seasoned with salt and pepper. The pieces of fish are delicate in flavor, but super delicious. Slight caution with this one though, it’s pretty spicy, which, I loved, but, should be thrown out there. A good cure is to fight spice with spice, so, just take a few extra sips of a 49ER.

The Shorts:
Name: Mission Cantina
Location: 172 Orchard Street, NYC
The Long and Short: Would I go back? Definitely. And when I do, I’ll switch it up and order some tacos or one of their massive burritos.
Would I recommend it? For sure. The service is great, the food is delicious, they’re throwing 90’s all over the place, what’s not to like? 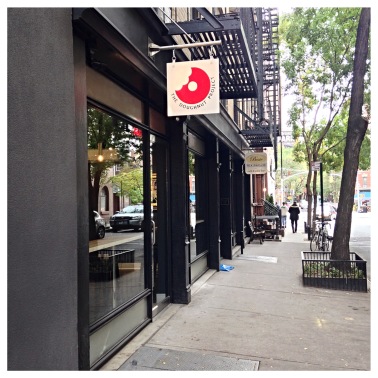 I eat a lot of doughnuts (donuts if you’re nasty), some are amazing, and some are just kind of meh. And, I appreciate a unique doughnut, so, you can save your sprinkles for Instagram. Basically, I’m kind of a tough one. Open only a few days now, The Doughnut Project is the new doughnut spot on the scene, located in the West Village, and I had to check it out.

Even if you’re not a doughnut person (weirdo), you should stop by just for the decor. A chandelier hangs, surrounded by a ceiling to almost-floor design, painted on the ceiling and wall itself. It’s accompanied by some smaller framed photos, which, basically all look awesome. Here you’ll find all yeast, hand crafted doughnuts, glazed and iced with unique flavors. I got four to try (they had six available flavors when I was there), listing in order leading up to my most favorite.

Then, I had the special that day, Cinnamon and Pepita. If I could use only two words to describe this, it would be, just delightful. The cinnamon gives you that warmth of flavor, and combined with pumpkin seeds, it’s pretty much Fall in a doughnut. The candied pepitas on top add a nice little crunch and nuttiness in flavor. If they have it on the menu when you’re there, get it and go outside to frolic through some orange leaves.

Next, I had the Pineapple and Habanero Stripe. So, pineapple as a raw fruit, I’m into it. Pineapple in desserts, usually not so much. I’m not totally sure what it is about it, but I don’t usually enjoy the taste. But, throw a curve ball and add a habanero stripe for heat, I’m in. I was so pleasantly surprised at how much I liked this one. The pineapple isn’t overpowering, and not overly sweet, giving you just the right amount of flavor to let you know that, hey, this is pineapple. Then, right away, you get a kick of heat from the habanero. The two are paired in other dishes, but this was a first for me to have them together in perfect harmony on a doughnut.

Finally, I had the Beet and Ricotta Stuffing. Oh, you don’t usually have your doughnut with beet and fresh ricotta? Newb. It’s the most visually grabbing, with it’s glossy bright purplish-red color, created only from the natural color of the beets. Again, not an overpowering flavor, but you definitely taste beet, which is complimented so nicely with the dough, which is stuffed with creamy ricotta. You could pretty much eat this for breakfast as a complete meal (veggies and cheese and grains, yeah!), or even lunch or dinner. I would.

The Shorts:
Name: The Doughnut Project
Location: 10 Morton Street, NYC
The Long and Short: Would I go back? For sure. The team there is awesome and super friendly, and they have a real unique and quality product.
Would I recommend it? Definitely. It’s one of the most aesthetically cool food shops I’ve been to, and then you add awesome doughnuts and coffee? Sold.