So, I’d been hearing a lot about this place for a number of months. And, as it usually happens with my schedule, and the intricate  formula that is, “it’ll take me X amount of time to get there + my schedule is Y = damn, I’m not going to make it”, I haven’t been able to go. Until now! Ok, let me clarify, I went, but “Y” informed me that I didn’t have a lot of time, so, I got some treats to-go from Queens Comfort in Astoria, Queens. 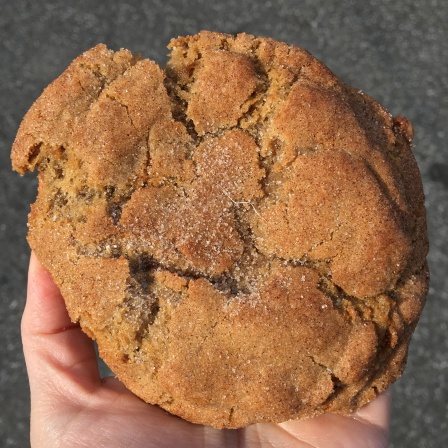 Now, this unassuming restaurant always has a healthy wait during brunch, which, is when my schedule allowed me to make it over. So, you know they’re doing something right. I’ve promised myself that I will make it back for a proper sit-down meal, because the menu looks awesome. But, in the meantime, I got my fix with a couple baked goods from their resident baker, dubbed the Donut Diva. And, the name is very fitting, since, she knows how to make a delicious treat. First, I had the cookie of that day (often a different flavor, or rotating flavors, so, check their social media, or, just be a sport, since, it’s probably going to be awesome no matter what flavor it is), which was Snickerdoodle Rolo. I’d like to consider myself somewhat of a cookie connoisseur, I’ve eaten a ton and know what I like, and, well, what I know I’ll be staying away from. This cookie, was legit. Generously sized, it really has the perfect combination that I love of a slightly crisp outside and edges, and a soft, almost under-baked center, making it soft, chewy, and melts in your mouth. The flavors were great, and you get these awesome bites with gooey caramel from the Rolo candies. Even though it’s a cookie, with candy inside, it’s not too sweet, which, makes it all too easy to house the entire thing. But, what are you saving it for anyway?

Then, I had to get a donut from the Donut Diva (because, what the hell sense would it make if I didn’t?). Now, the donuts are primarily only available on the weekends, which, even though I knew about the brunch lines, I had to go for the donut. And, just like the cookies, there’s likely to be a different flavor each time. So, you just have to be up for the adventure, or, check Instagram to see what’s on tap before you go. When I went, they had Candy Corn Marshmallow. Now, I’m a candy person, so, I love candy corn, but I realize it’s one of those polarizing candies. Luckily for me, it’s all positive. The cake donut itself is also generous in size, and had the candy corn within the donut’s batter itself. The cake is great, it’s a little crisp on the outside, nice and golden, and tastes just like a griddle cake. Then, there was a marshmallow-esc glaze on the outside, giving it a nice delicate compliment to the donut and candy corn. And, one of the best parts is the waste-free zone. I hate waste, and apparently these guys understand, so each donut is complete with its own donut hole on top. Adorable. And, somewhat of a bonus dessert. Again, like the cookie, while the donut looks intense, it’s not overly sweet, also allowing me to stuff the entire thing in my face and not feeling a gross sugar rush.

The Shorts:
Name: Queens Comfort
Location: 40-09 30th Avenue, Queens
The Long and The Short: Would I go back? Definitely. I mean, I need to go for a meal there, but, even if that’s not in the cards, the donuts and cookies are worth a trip back.
Would I recommend it? Yes. If you’re lucky enough to carve out some time for brunch, get there early and beat the big wait. If not, they’re open for lunch and dinner during the week as well. 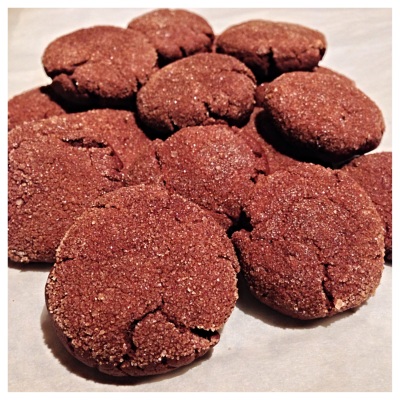 This weekend, I had an urge to do some baking. I wanted to use some things I already had. I had a whole tub of cocoa powder that I never use, and a little too much almond milk left. Since I don’t really keep eggs or dairy in the fridge at all times, I figured I’d find a vegan recipe. I came across a recipe for Mexican Hot Chocolate Snickerdoodle cookies from This Rawsome Vegan Life.

Preheat the oven to 350F. Line a large baking sheet with parchment paper. Mix the topping ingredients (cinnamon and sugar) together on a flat plate and set aside. 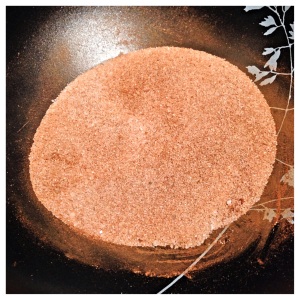 In a medium mixing bowl, mix together the oil,  sugar, syrup, milk and extracts.

Sift in the remaining dry ingredients. Once all the ingredients are added, you’ve got a pliable dough. 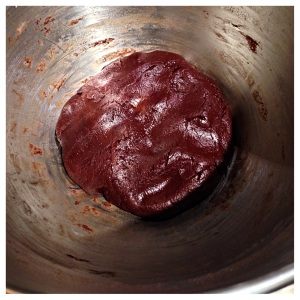 Roll the dough into walnut sized balls. Pat those into the sugar topping to flatten into roughly 2 inch discs. Transfer to the baking sheet, sugar side up, at least 2 inches apart. Bake for 10 to 12 minutes. Then, let them cool for 5 minutes.

My personal tips after making the cookies:
To get more kick, I would recommend doubling up on the cayenne so you really get a little heat.
Also, check in on the cookies at 8 minutes, they may be done at that point depending on the oven’s strength.
You can find the original recipe HERE.
Recipe-friendly version:

Preheat the oven to 350F. Line a large baking sheet with parchment paper. Mix the topping ingredients (cinnamon and sugar) together on a flat plate and set aside.

In a medium mixing bowl, mix together the oil,  sugar, syrup, milk and extracts.

Sift in the remaining dry ingredients. Once all the ingredients are added, you’ve got a pliable dough.

Roll the dough into walnut sized balls. Pat those into the sugar topping to flatten into roughly 2 inch discs. Transfer to the baking sheet, sugar side up, at least 2 inches apart. Bake for 10 to 12 minutes. Then, let them cool for 5 minutes.