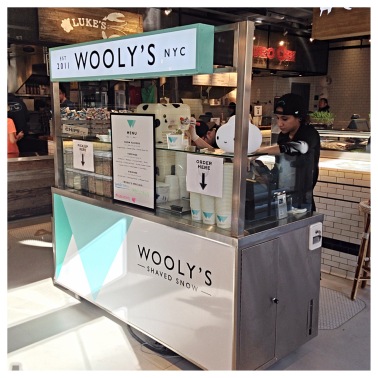 On my recent trip to the new City Kitchen in Times Square, I saw some familiar vendors, and was introduced to some new ones. One that I hadn’t tried before was Wooly’s Shaved Snow, so, of course, I had to give it a shot. Now, I’ve had loads of different desserts in my life, but this was actually the first time I was going to try real shaved snow, or, shaved ice. Wooly’s is making a Taiwanese-style shaved ice, and if you haven’t had shaved ice before, don’t think of a snow cone, it’s completely different. Don’t think of ice cream either, it’s still completely different. Ever seen and felt fresh powder snow? Ok, now you’re on the right track. So, take that, add some flavor, throw some toppings in, and you’ve got it.

They have a few different flavors of snow, and a number of toppings to choose from (included, you pick 3 toppings and one finish). I had their Original Leche with Pocky Sticks, Graham Cracker Crumble and Captain Crunch. I ordered it with Chocolate Drizzle as the finish, but…they forgot the drizzle! Partly my fault too for not noticing, but, I was excited about trying this for the first time, there were Pocky Sticks sticking out of there, I had to take a picture before it started to melt…so many things. And no drizzle. But, I was still able to enjoy it. The snow itself is extremely light, which you’ll automatically see when picking up your cup. It really feels like eating fresh snow, but with a subtle sweetness and creaminess from the milk. It’s the perfect frozen treat to enjoy, since it’s not too sweet, and not heavy, so it will leave you feeling satisfied without feeling too full. Also, depending on your toppings, you can really create a fun little dessert, complimenting the flavor of snow you choose. The toppings I ordered worked out really well, it was basically like eating a frozen, light, bowl of dessert cereal (without the drizzle…ok, I’m over the drizzle…I also just like saying the word drizzle).

The Shorts:
Name: Wooly’s Shaved Snow
Location: City Kitchen, 700 8th Avenue, NYC
The Long and Short: Would I go back? Yes. Now, I love ice cream, but, my stomach doesn’t love a lot of heavy dairy floating around. Shaved snow is the perfect fix if you’re after something subtly sweet, light, and refreshing.
Would I recommend it? For sure, it’s an experience to try it, in itself, and anytime you can customize toppings, well, that’s just plain fun.