Almost eighty years ago, Empire Diner made its debut, but more recently, it was reopened, revamped, and about damn time I went. So, I was off to Chelsea for brunch to check it out. 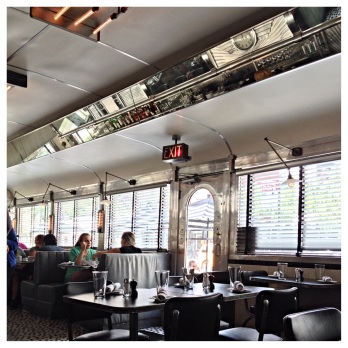 As a genuine boxcar diner, it made me a bit nostalgic of the late Relish Diner in Williamsburg, one of my old favorite spots (RIP). Inside, the aesthetic is clean, crisp and modern, but still pays homage to the old school diner vibe.

Then, for my entree I had to go for the Buttermilk Pancakes (fluffy pancakes, maple syrup, blueberry compote). Man alive, these were some incredible pancakes. They were light, pillowy, but still rich in flavor, and the blueberry compote was totally clutch. You can taste the simple freshness and flavor of the blueberries, unlike some of these overly sugared, artificially flavored versions at your run-of-the-mill diner. Pour some maple syrup on this bad boy, and you’ve got a slam dunk, right into my stomach.

The Shorts:
Name: Empire Diner
Location: 210 Tenth Avenue, NYC
The Long and Short: Would I go back? Absolutely. The atmosphere is awesome, the food is delicious and the service was excellent.
Would I recommend it? For sure, you won’t be disappointed. It’s also located right by the High Line, so, go have a great meal and take a stroll to then think about how awesome your meal was.

One thought on “Empire Diner”