Doughnuts. You guys probably already know, I can’t get enough of them. I had already checked out Sublime Doughnuts during my time in Atlanta, but, I’m not going to just stop at one shop. I was off to check out Revolution Doughnuts. Here, they’re hand making all their doughs, glazes and fillings from scratch, using real food ingredients like organic flour, local dairy, fresh fruit, natural flavor extracts, and 100% trans-fat free vegetable oil. So, there’s a lot of care involved. These guys carry a bunch of accolades for their doughnuts, so, I had to try a bunch. You know, research.

Now, common for popular doughnut shops, they’re bound to run out of certain flavors throughout the day. After I wiped my tears and picked myself off the floor, I organized a pretty decent order. In no particular order, I first had the Vanilla Bean (yeast). The simplest of the bunch, it still packed some lovely flavor. The yeast dough is light with a bit of chew, and really nice. The glaze here was almost a super vanilla (I think it had a cape on), really packing in natural vanilla bean flavor, noting the tiny little bean specks.

Next up was the Raspberry Sprinkle (yeast). Now, contrary to this one looking like a generic Homer Simpson doughnut, I was pleasantly surprised at how much I enjoyed this one, all due to the delicious, natural flavor of the raspberry. You get the sophistication of a real raspberry fruit glaze, with the fun and whimsy from the sprinkles. Perfect for the kid at heart. 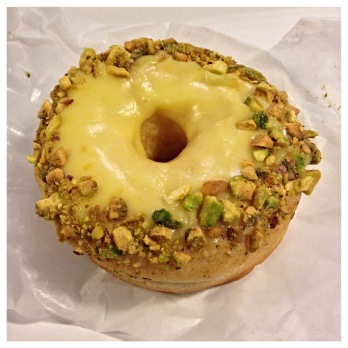 Then, I had the Orange Pistachio (yeast). I’m not a huge citrus dessert person, but it looked so pretty I had to try it. And, I’m really glad I did. There’s a zing from the orange citrus, balanced with the nuttiness of the pistachios, and the crunch mixed with the soft dough is just delightful. 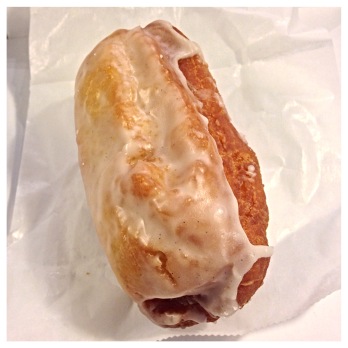 Next up was the Cinnamon Apple Fritter (yeast). Man, I love a fritter. Maybe because it’s just fun to say, but, then again, it’s also probably because they’re really delicious. Here, you get a light and delicate apple flavor, with a crisp outside and soft inside. No complaints here. 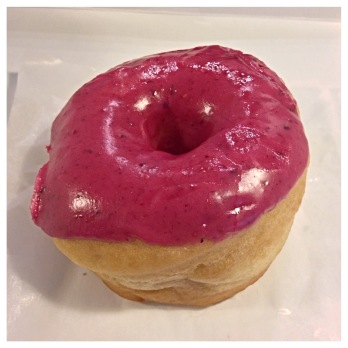 After that I tried the True Blueberry (yeast). Again, same great yeast doughnut base, but I really enjoyed the real, natural flavor of the blueberry, which you can absolutely taste. 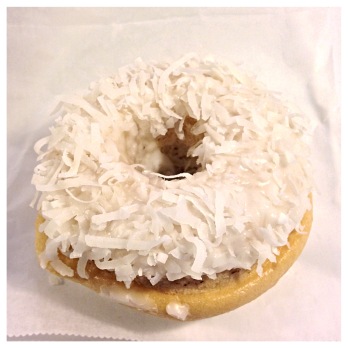 Finally, and maybe one of my favorites, was the Shredded Coconut (baked cake). This was the only cake doughnut they had on tap at the time, so, I knew I had to scoop it up. The doughnut is a dense cake, and it’s super moist (awful word) and delicious. The coconut glaze is perfect, and the added texture of the shavings just kicks it up a notch.

The Shorts:
Name: Revolution Doughnuts
Location: 908 West College Avenue, Atlanta, GA
The Long and Short: Would I go back? For sure, they’ve got a lengthy menu of doughnut flavors that I wasn’t able to try, that I really would love to try another time.
Would I recommend it? Definitely. They have cafe tables for you to kick back and enjoy your doughnuts, or, if they’re out of a flavor and tell you the next batch will be ready in 30 minutes, park it and wait for those fresh bad boys to make their way out of the kitchen.